Our usual take on sector-specific telecom taxes is that they increase the price of telecom services, lead to either a slowdown in demand or even a massive reduction in demand (we’re looking at you, Uganda). But there is another aspect that is not as widely known: how governments’ can have an impact on retail prices by trying to control wholesale prices. Australia is a great example of good intentions that became mired in inflexible policies and has lead to really high prices and slow speeds.

In 2009, Australia started building a National Broadband Network (NBN) with the objective to deliver fibre to 93% of households and for government to take over the existing fixed line network from the incumbent, Telstra. There is effectively a single wholesale government network and Australia has adopted a unique wholesale pricing regime. There are two components to prices for resellers: the Access Virtual Circuit (AVC) and the Connectivity Virtual Circuit (CVC). The AVC is the standard monthly charge per user. The CVC is the amount that a reseller pays the NBN for bandwidth over and above the allocated bandwidth in the AVC. This means that it is up to the reseller to determine how much extra bandwidth they are going to require, that is, above their initial allocation as part of the AVC. If data demand increases rapidly, the NBN pricing regime means that costs for resellers escalate faster than retail prices. This leads to an inevitable margin squeeze for these resellers who have to pay the over-usage fee to the NBN. The NBN is seen by nearly all operators as a major constraint to connectivity in Australia. This is super technical, so let’s look at the consequences. Below is the price for 20GB of data per month. Australia is considerably more expensive that Indonesia, Malaysia, Thailand and Vietnam. 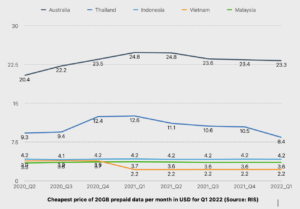 That’s pretty damning. The real problem is that the Australian government has been warned for nearly 10 years of the consequences of this inflexible wholesale price regime. Only in 2022, has the government signalled that it is prepared to modify the price regime, though it only expects to implementation some time in 2023.