Taxes on voice, SMS and data were imposed by the Benin government on the 19th of September 2018 and withdrawn five days later following a mass outcry. The taxes would have increased end user prices, limited the use of ICT for the poor and small and medium sized business and slowed down ICT induced economic growth and job creation. The new taxes would have aggravated an already strained ICT sector after a tumultuous 2017 (Table 1). At the beginning of 2017, Benin had 5 GSM operators, by the end of 2017, there were only 2 GSM operators: Moov and MTN (Table 2). In May 2018, Benin settled with MTN on spectrum fees. MTN agreed to pay the fees in instalments, receiving a 5 year extension to its license as well as the license to install fibre. 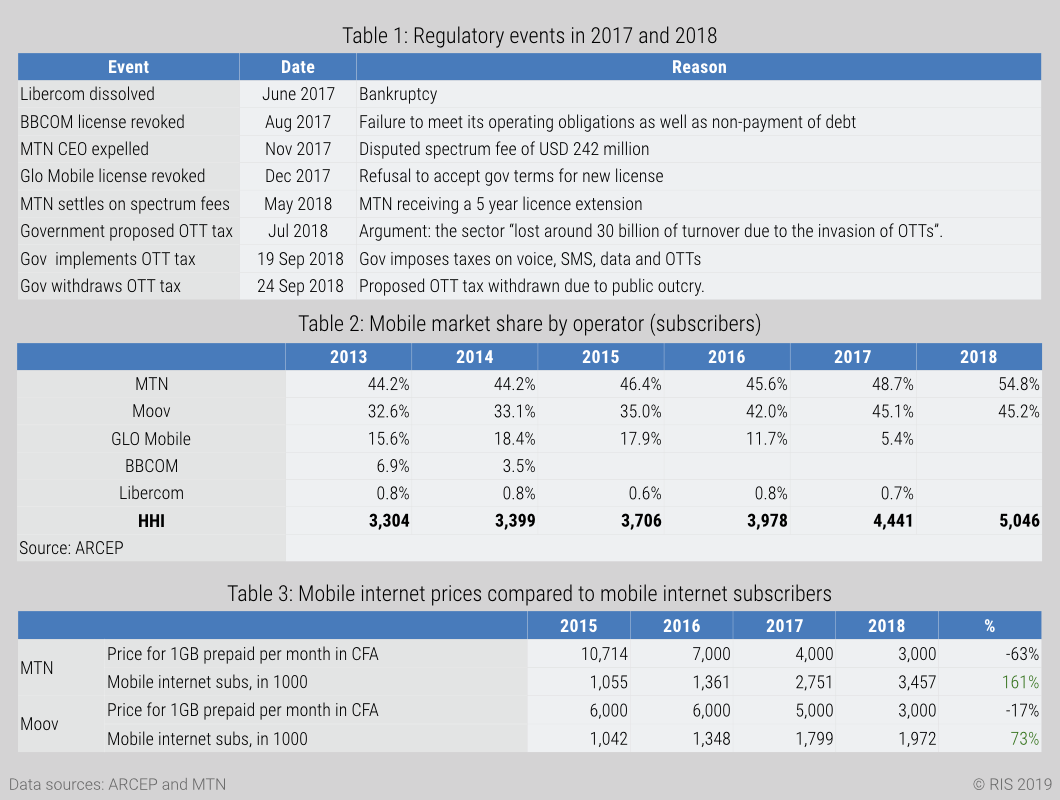 However, in the context of Africa, prices for mobile broadband have not come down fast enough in Benin (Figure 1). Benin’s ranking has dropped from 10th cheapest to 29th cheapest country in Africa between 2015 and 2018 for 1GB mobile broadband data per month (Table 4). The fact that Benin’s ranking is deteriorating compared to the rest of Africa is due to the lack of competition in Benin’s ICT sector. This has significant knock-on effects because it means that Benin benefits less from ICT driven economic growth than other countries. 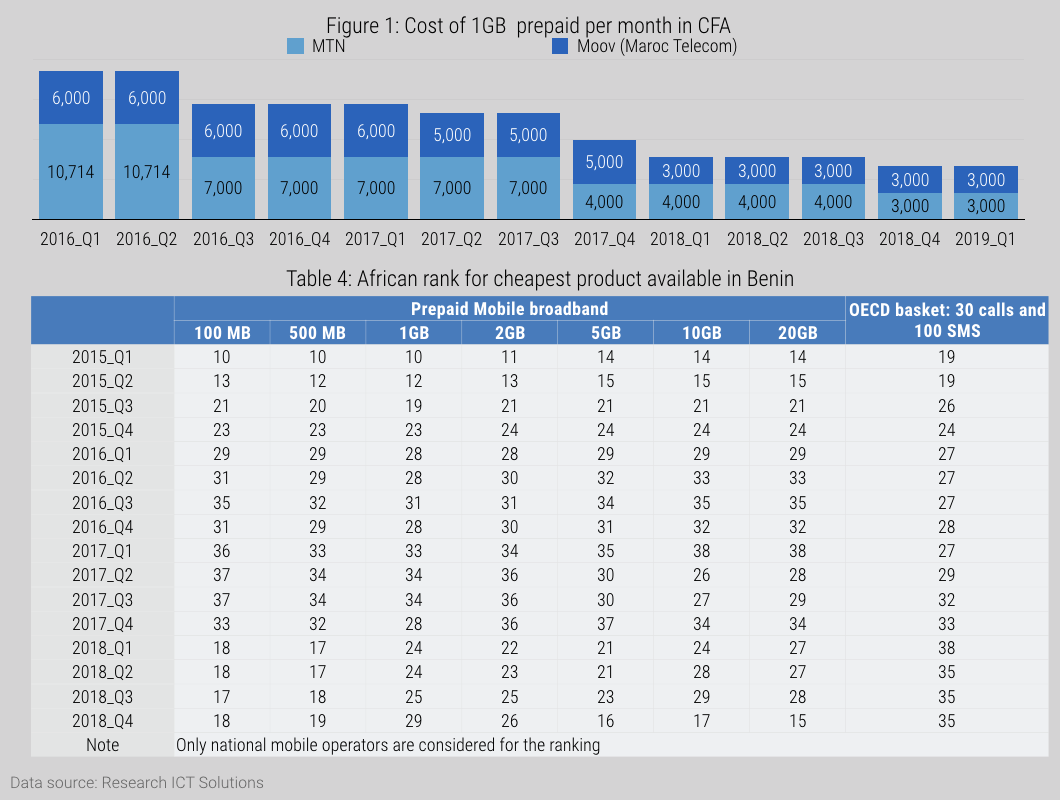 Benin’s ICT sector is dominated by MTN, which had a market share of 55% of subscribers in 2018. MTN’s subscribers have continuously increased over the last five years. It is noticeable that there was a drop in revenue and in ARPU during 2017 (Figure 2), likely the result of a price war and regulatory squabbles during 2017. From Q1 2018 revenues grew again.

Regulatory intervention affected MTN’s EBITDA margins which dropped to 19% in 2017. This is considerably lower than the EBITDA margins of MTN Ghana (39%) and MTN Nigeria (40%), where MTN is also dominant but competes with more operators. The drop in EBITDA margin was caused by the USD 242 million that was set aside for the spectrum penalty that ARCEP imposed on MTN. The dispute was resolved in Q2 2018. The EBITDA margin rose to 24% in 2018 (Figure 3). 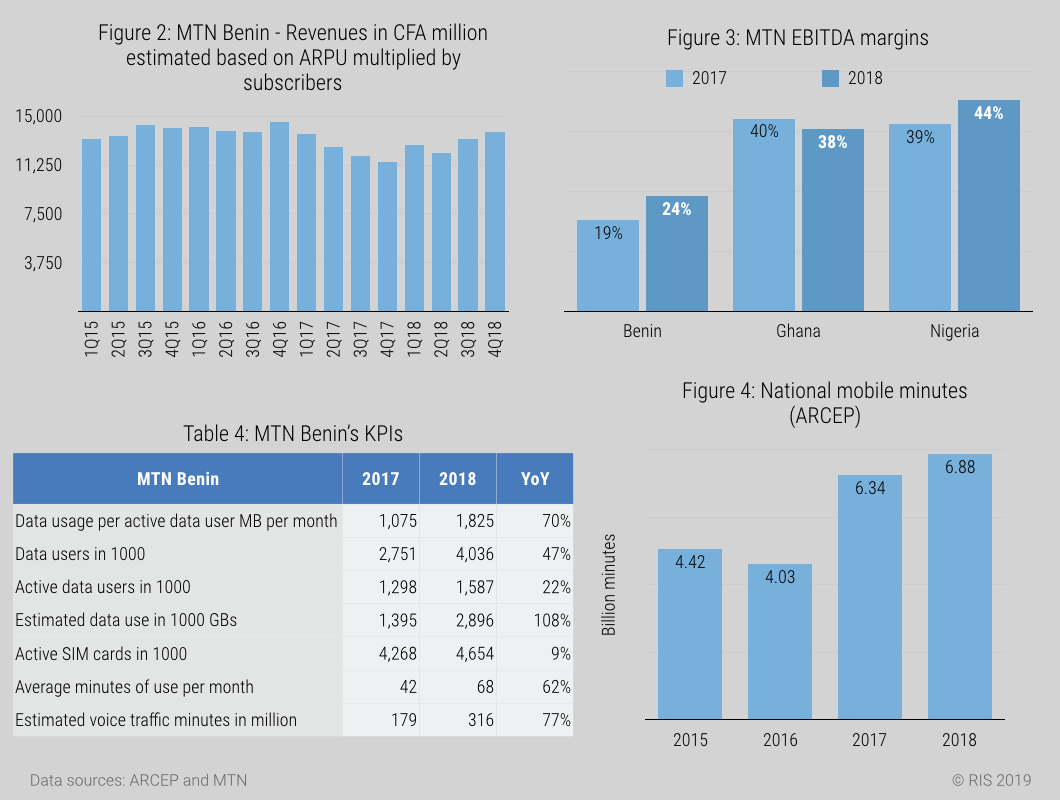 The Executive Secretary of ARCEP was the guest of the Sunday program "Zone Franche" on Canal 3 on September 2, 2018. In the interview, the Secretary stated that “between 2016 and 2018, operators lost around 30 billion of turnover due to the invasion of OTTs, which do not contribute to the turnover of the operators they use, infrastructure or national tax revenues”.

MTNs KPIs prove this statement to be incorrect ( Table 4). While data prices dropped in 2017 and 2018 (Figure 1), average data use per active data user increased by 70% and voice traffic also increased by 77%. If subscribers were shifting from voice to data and using OTTs, then it would make sense that voice traffic would decline. Since the opposite has taken place, the fluctuations in the market are clearly not due to OTTs but regulatory intervention.

Regulatory intervention in the market caused the decline in mobile operator revenues in 2017. The removal of three licensees from the market during the same period has lowered competition and meant that prices are not declining as fast as the rest of Africa. In 2018, with some of the negative regulatory interventions resolved, ARPUs and subscriber numbers increased again.