This week’s newsletter provides a quick update on the OECD digital tax framework. Some background first: On October 8th 2021, the OECD announced a ground-breaking tax deal for the digital age. The OECD’s two-pillar approach intends to take unilateral digital tax measures off the table and avoid trade wars over digital service taxes. The new tax deal, signed by 137 out of 141 member states, representing over 90% of global GDP, will allocate around USD 125 billion in profits to countries around the world. The implementation of Pillars 1 and 2 follows separate paths with the plan for implementation for both being 2023.

There has been some drama in moving the project forward. The EU is seen as the first mover on the project mainly because the EU has been at the forefront of designing how the tax would be implemented. But the EU also requires unanimity from its members before the tax framework can be approved. In the interim period, EU countries have agreed to the plan and then changed their minds (e.g. Hungary). This makes implementation tricky!

In the meantime, two things are happening: 1) the OECD is moving forward with a series of consultations ending in August this year; 2) A number of countries have either implemented a unilateral DST or proposing a DST while they wait for the OECD framework to be implemented. Canada, for example, has stated that it is moving ahead with its own DST to be implemented on January 1, 2024. However, the DST would be withdrawn if the OECD Framework is implemented. Several European countries have adopted the same approach. As you can see from the map, though, the approach in the EU is pretty fragmented. Several countries have not legislated the repeal of the DST if the OECD framework goes ahead. That will likely cause further delays in EU implementation. 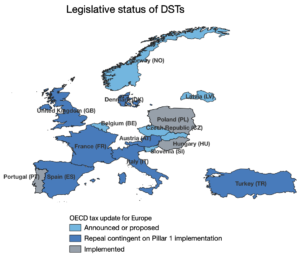