The Status of Community Networks in Kenya

RIS has been working on the status of Community Networks (CNs) in Africa. Our first challenge was simply the lack of data about CNs. Unlike formal telecom operators such as mobile networks like MTN, Airtel or Vodacom, many CNs purposefully operate in a grey legal area. This partly reflects the history of the telecom sector, which was dominated by fixed-line incumbents in the late 20th century and is now dominated by mobile operators. Until recently, regulators have either actively excluded CNs or ignored them. This means that some CNs operate without official licenses and want to keep a low profile.

Regulatory attitudes are starting to change as the telecom landscape is changing. In the past, telecom operators needed to be vertically integrated so that they could supply international, national and local connectivity. However, these segments of the connectivity value chain are increasingly supplied by independent companies, such as tower companies that supply wholesale passive infrastructure to any mobile operator or fibre companies that provide wholesale access to any last mile provider. This has created a space for CNs where there wasn’t one before.

This space is partly the result of the difficulties of serving mostly rural, low-income people. Mobile operators find that their cost structure is ill-suited for these customers. But it also means that transposing regulatory frameworks that were designed for large, vertically integrated companies is not appropriate. This transition towards a new regulatory framework specifically for CNs is only just beginning in Africa and Kenya is one of the foremost proponents of this new approach. Even though Kenya is a leader in this area, there are still only four CNs in the country. A new regulatory framework for CNs was implemented in Kenya in late 2021. You can download a brief case study with more details about this framework as well as next steps for CNs. 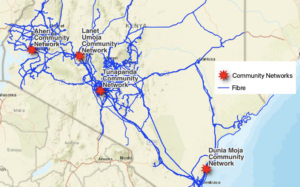