Voice is still important in Africa

Airtel Africa released its results for the quarter ended June 2022 and their performance is pretty impressive. EBITDA margin increased from 44% to 49% between 2020 and 2022. Revenues jumped from US$ 3.4 billion to US$ 4.7 billion. But one of the more interesting statistics is the trend for both voice and data. Data grew by 108% for the 2 years between June 2020 and June 2022 and voice grew by 44% for the same period. Strong data growth is the new normal but it’s the strong voice growth that is unexpected, especially when it’s predicted that voice revenues will decline precipitously. Voice revenues are still important in Africa. 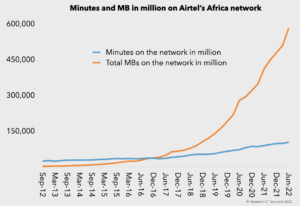 The growth of voice on 2G networks is going to change in the near future, though faster for some countries than for others. South Africa is planning to turn off its 2G and 3G networks by the end of 2023 in order to use that spectrum for 4G and 5G rollout. New 2G devices will also be banned by the end of 2023. If this happens in countries that Airtel operates in, then the total minutes on the network should fall off a cliff. But it’s not as though voice will no longer be important. Voice will migrate to 4G and 5G networks. Ericsson believes that voice on 5G will mean greater opportunities for telco’s because there are so many new products that 5G will enable, such as interactive calling where a voice call is supplemented with AR and VR applications.