What happens when a government relies too much on a single source of taxation?

What happens when a government relies too much on a single source of taxation?  The goal of taxation, especially for the ICT sector, is not revenue maximization, but to balance competing goals of access to the telecom services and at the same time generate sufficient revenue to pay for public goods like roads and health care. The excessive focus on excise duties as one of the main mechanisms to get tax revenue from the sector means that usage is penalized by driving up prices and lowering affordability. This also disproportionately targets the poor.

Figure 1 shows how Uganda has taken this approach to its extreme. Airtel and MTN combined pay more than 39.9% of total excise duties for the FY 2019/2020. Yet they only contribute 1.8% of GDP. 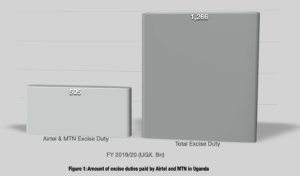 Uganda is too reliant upon a single source of taxation and the effect is less competition and increasing prices. Africell left the market in October and Smile Communications is offline and effectively bankrupt, leaving just two dominant operators, Africell and MTN. Under these circumstances, the long-term outlook for the Ugandan market is poor.