How not to run the mobile sector

KEY READING FOR THE WEEK

The newsletter this week is a case study on how not to run the mobile sector. Namibia used to have one of the most dynamic sectors in Africa. Its mobile broadband prices were amongst the cheapest in Africa. Over a decade ago, it introduced innovative bundles like the Aweh packages that combined data, minutes and talk time. Then, in 2014, the state started to nationalize the sector. Telecom Namibia purchased Leo, a privately owned operator. In 2018, the state increased its shareholding in MTC to 100%. The state now owns 92% of ICT sector assets. The sector has been on a downward spiral ever since.

A report released by the Communications Regulatory Authority of Namibia (CRAN) documents the impact on the sector. In USD terms, the mobile sector revenues declined by 10% between 2012 and 2020. Shareholder equity declined from USD 290 million to USD 140 million in 2020. Assets also declined. Net profit was USD 50 million in 2012 and only USD 52 million in 2020, a compound annual growth rate of just 0.44%. In contrast, mobile sector revenues in the rest of Africa have grown strongly. The table below from the report is pretty damning. 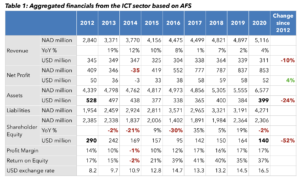 Consumers have really paid the price. A 2 GB data basket used to be amongst the cheapest in Africa. Now, Namibia is ranked 47th out of 54. Quality of service is terrible and 3G is basically unusable. What is the way out of this mess? The report points the way: increased competition, attracting private sector investment and removing obstacles to infrastructure rollout. Let’s hope that policymakers are listening.

Other weekly news from around Africa