KEY READING FOR THE WEEK

On October 8th 2021, the OECD announced a tax deal for the digital age. The new tax deal, signed by 136 out of 140 member states, representing over 90% of global GDP, will allocate around US$125 billion in profits to countries around the world. In the second part of our series on ICT taxes, the focus is on unpacking how the OECD deal will work. The first step is to define the problem. The central issue is that, because Netflix doesn’t have a physical presence in Kenya, Netflix is not liable for any corporate income tax (CIT) even though they sell services to Kenyans in Kenya (see item 1 in the figure below). 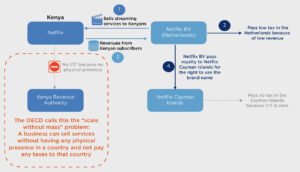 From an OECD perspective, there is another issue: the transfer payment from Netflix BV incorporated in the Netherlands and Netflix Cayman Islands (items 3 and 4 in the Figure). By paying a royalty fee to Netflix Cayman Islands, Netflix BV can claim very low revenues in the Netherlands and therefore pay a very low CIT. The OECD solution is laid out in the table below.

From a digital tax perspective, Pillar 1 is the innovative new development. Pillar 1 solves the main challenge that many unilateral DST’s (i.e., imposed by individual countries) cannot address because they cannot impose cross-border taxes. For example, the DST in Kenya only focuses on Kenyan residents and doesn’t address digital transactions where a digital platform sells Kenyan user data to unrelated 3rd party (say the Ukraine). At present, Pillar 1 is the best solution currently on offer, though it is still a complicated tax. How complicated it is will be the subject of next week’s blog post.

Other weekly news from around Africa