Why are mobile coverage maps so bad?

Mobile operators are notoriously reluctant to release useful coverage information. Individual operator coverage maps are generally useless. Airtel Zambia is a classic example – as you zoom in the map abandons any hope of showing coverage and just highlights specific spots where there is (may be?) coverage: 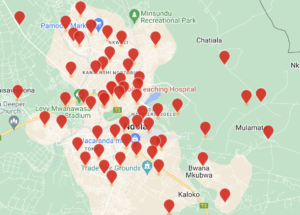 Most coverage maps exaggerate coverage dramatically. The GSMA’s Mobile Coverage Maps use a really large radius for 4G of over 20km’s. In interviews with operators, the consensus for rural areas is around 8km, depending on factors such as terrain and population density. 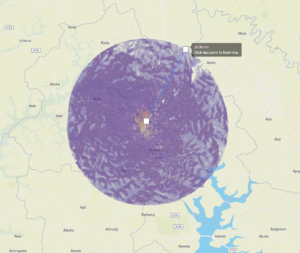 Accuracy is important for two reasons:

Combined coverage maps showing all operators infrastructure can show where investment is needed from both a public and private point of view: for government, where incentives might be needed for commercially non-viable areas and for private operators, where opportunities might exist. It’s a win-win for all.

One of the obstacles is the lack of a standard approach. Signal strength, range (or radius), download speeds are all up for debate. The Uganda Communications Commission (UCC) has just released its attempt at standardizing submissions from operators. In its public consultation document, the coverage standard is “a minimum received signal strength of -90 dBm in at least 90% of the area as determined through prediction analysis”. But the document doesn’t address radius nor does it explain why -90 dBm is an appropriate signal strength. One of the few studies that investigates signal strength is from Ofcom in 2015. Ofcom found that handset sensitivity in free space – when a person is not holding the phone – were very similar to GSMA recommendations. But when Ofcom tested scenarios where the handset was held next a person’s head, the performance degraded significantly (fourth column in the table below).

What’s needed is a standardized, open approach to coverage maps, based on signal strength as well as range or radius. Here’s our proposal – based on Ofcom’s findings and operator interviews – for building a coverage map, but we desperately need to develop a consensus-based open data standard!