Doubling down and making it worse

May 6, 2022 by Steve Esselaar OTT Regulation

In South Korea, telco’s have managed to persuade the state to intervene and impose an entirely new regulatory regime for Internet peering. Called Sending Party Network Pays (SPNP), the government requires  ISPs (and Content Providers) to pay to send traffic to another ISP. For example, if a large ISP hosts a CDN, then the large ISP would pay to send traffic to a smaller ISP, even though it is the customers of the smaller ISP that are requesting the data (Scenario 1 in the graphic below). If that CDN is then moved outside of the country, then all ISPs have to pay for the transit to get the data from the CDN (Scenario 2). This motivates smaller ISPs to get a CDN on their own network because they could save on International IP transit fees (Scenario 3). 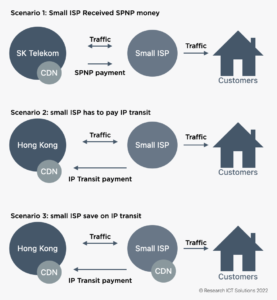 The SPNP regime adopted by South Korea has upended this process. Instead of commercial imperatives governing agreements between ISPs, the South Korean government has inserted itself into the middle and now dictates the price of traffic transfer between networks. We see the perverse incentives this creates by looking at what happened between Facebook and one of the largest ISPs in South Korea, KT.

In 2017, two ISPs, SK Broadband and LG Uplus, asked for payment from KT for the Facebook traffic KT was sending them via the Facebook CDN KT was hosting. (Even though SK and LG users were requesting that data, the SPNP rule means that KT had to pay for sending excessive traffic). KT tried to pass the charges onto Facebook, who refused to pay. After the breakdown of negotiations between KT and Facebook, Facebook disabled the CDN, which meant that Korean telcos had to access other CDNs, such as the one in Hong Kong. As a result, connections to Facebook took 4.5 times longer on SK’s network and 2.4 times longer on LG Plus’s network. KT complained to the regulator, KCC, which issued Facebook a fine of 396 million won (US$ 321,000), arguing that the removal of the cache had significantly harmed users. On 11 September 2020, the Seoul High Court sided with Facebook and dismissed the KCC case.

The Facebook example illustrates the disincentives of the SPNP regime for ISPs to host caches. While the rest of the world tries to get content caches ever closer to the edge, in South Korea a CDN bears financial risk for ISPs. Instead of increasing the quality of service for the end user and stimulating investment into content caches, CDNs are moved abroad, increasing latency and adding costs for ISPs. This means that users pay more for lower quality service.

But the South Korean government is either not aware of these perverse incentives or doesn’t care. In 2020, the Korean Ministry of Science and ICT passed a decree requiring all CP’s to guarantee the quality of their service. Under the decree, all CPs are required to secure the “means of service stability”. This applies to all companies, both foreign and domestic, that have more than 1 million daily users and take up more than 1% of total network traffic in South Korea.

What the decree does is pass the responsibility for quality of service of the last mile network to the CP. As Mozilla notes: “Going against globally accepted practices, the amendments will make websites, instead of ISPs, responsible for ensuring users have a stable network experience, free from technical challenges such as delays in a website opening or slow download speeds.“