Quality of service is improving across Africa

This week’s newsletter is a followup from last week’s post on affordability.  This week we’re looking at Quality of Service (QoS). Data on QoS is notoriously difficult to get. Regulators that track QoS via randomized testing don’t release the results publicly and sometimes even accessing the data within the regulator can be difficult.

Fortunately, Ookla has a publicly available data set as part of its Open Data Initiative. We downloaded the quarterly datasets from Q4 2020 to Q3 2022. The datasets have upload and download speeds, latencies, number of tests and number of devices. We did a spatial join for the continent of Africa so that we can do a similar comparison to last week and took the average for the whole continent for each indicator.

The data shows that average download speeds improved by 43% and average upload speeds by 20%. This is a fairly marginal improvement, especially for upload speeds. Upload speeds are an increasingly important metric because, as networks move to 5G, there will be more communication from the edge to the core of the network, requiring better symmetry between upload and download. The interesting metric is that latency, measured in milliseconds, declined by 9%. Latency is the time it takes for data to travel from one point to another. In gaming, high latency could make the game unplayable if there is too much of a delay between a player’s movements and it being shown on the screen to other players. Still, average latency was 41 milliseconds in Q3 2022, which is a pretty good score. 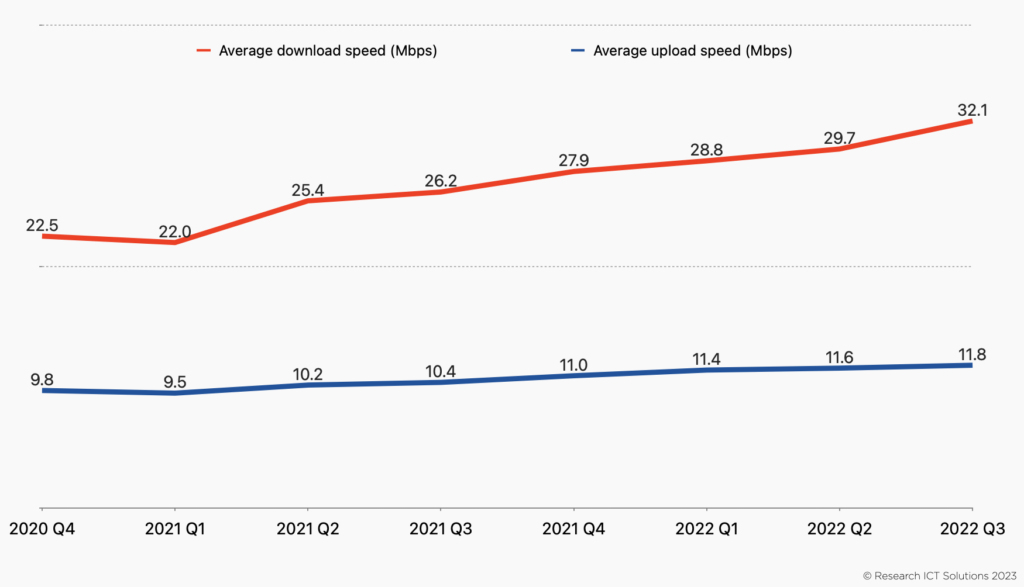